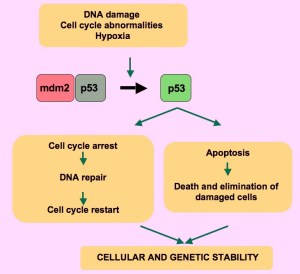 Is called “guardian” or “police”, because any alteration that is in the cell, and there are many cancer associated, activates it. Crucial in preventing cancer, p53 is an anticancer gene that under normal circumstances we defend the disease. P53 blocks or kills the altered cell, prevents their proliferation or cell division (cell suicide) or because maintains blocked without leaving reproduce. Is a gene that is activated only in stressful situations, when there is damage in a cell is a detector of dangerous situations, a sensor.

So that there is a cancer p53 has to be inactive, and is at 55% of the most common cancers:

Researcher Manuel Serrano, head of the group of tumor suppression National Cancer Research Centre (CNIO) who has worked in p53 said: “It is a key gene, so is the star of gene” it is simple: p53 is key,   because it is the gene most frequently mutated in cancer.

The name p53 was given in 1979 describing the apparent molecular mass: SDS-PAG analysis indicates that it is a 53-kilodalton (kDa) protein. All these p53 proteins are called the p53 isoforms (from Wikipedia).

Have been incriminated as potential mutagens p53.