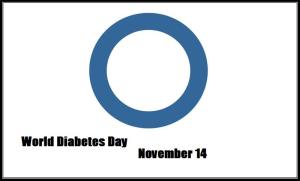 On 14 November is World Day of Diabetes.
Chronic disease of metabolism, due to total or partial absence of the hormone    insulin, secreted by the islets of Langerhans in the pancreas.
Its deficiency produces no absorption by the cells, glucose, resulting in less energy synthesis in the cell and increased blood glucose (HYPERGLICEMIA).

It is a time bomb and a threat to the health of the global population.
Possible complications:

The vast majority of cases of type II diabetes often accompanies obesity, accounts for 85% and 95% of all existing types.
Approximately 32.7% of people with diabetes using insulin, 73.4% take oral medications and 29% have received any class or course on how to manage the disease.

The earliest references of which have news, are eastern Susruta V century BC, calling it «disease of the rich» because they were those who had access to sweets. The Chinese spoke of «sweet urine.» In the West the first news is in Luxor, so there is a
papyrus of 1553 BC which speaks of it in Egyptian medicine.
Biologist discovers Langerhans islets in the nineteenth and Banting pure insulin the XX.
There is a HOPEFUL FUTURE that makes the illness more bearable, as in:
– Balanced diet and exercise
– New drugs
– Embryonic stem cell transplantation in the diseased pancreas
– External pump insulin percussion